Click the circle below to hear Francis Morrison's 24-minute talk in Rohrbach Library's Second Floor Gallery on September 19, 2012.  Or you can right-click the words audio file to download to your own player.

Mr. Morrison discusses the six players depicted in The Last Summer and also examines the career of Newark Eagles owner Effa Manley in a talk that emphasizes the contributions of women to Negro League baseball. 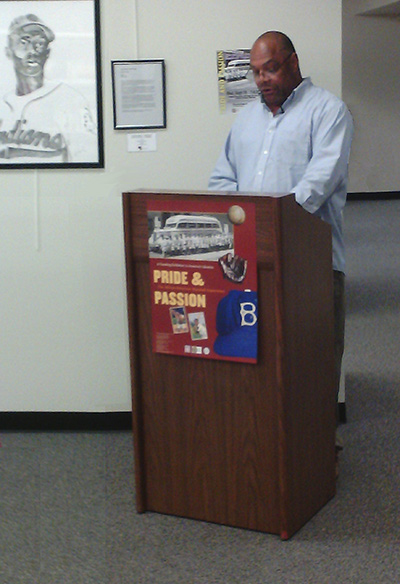 Visual artist Mr. Edward Terrell and scholar and community activist Mr. Francis Morrison join together to highlight the Negro Leagues and the players who participated in the transition from segregation to the integration of Major League Baseball and its Hall of Fame.

Mr. Edward Terrell, a professional artist for more than forty years and Director of the ACOR (African American Coalition of Reading) Art Gallery, is known for his signature style of stipple, the use of multiple dots and pencil to create portraits. He will hang in Rohrbach Library, for eight weeks, original images of the Negro League’s greatest players: Jackie Robinson, Satchel Page, Toni Stone, Rube Foster, Connie Morgan and Mamie "Peanut" Johnson and will speak about the works during the program.

Mr. Francis Morrison will provide a lecture that places an emphasis on the ascent of Negro League Baseball and its eventual demise, with discussion of the various owners who created an alternative for African Americans who had the talent to play professional baseball as well as the socioeconomic conditions and the interactions between essential stakeholders of both leagues that ended the segregation of Major League Baseball.

His lecture will also highlight women such as the great Toni Stone who played in the Negro Leagues and those who, like Newark Eagles owner Effa Manley, occupied key front-office positions, as well as the impacts Negro League players had on the playing style of Major League Baseball and the backstory of their eventual induction into Baseball’s Hall of Fame.

The 90-minute program will conclude with a Q & A period. Food will include delicious sandwiches, salads, fruit and vegetable platters, brownies and cookies.

Artist Edward Terrell and Activist Francis Morrison have combined visual art and oral tradition in an effort to highlight Negro League Baseball and its players who helped to transform a culture of segregation into a culture of equal opportunity.

Terrell, an artist of forty plus years' experience, known for his signature style of stipple, the use of multiple dots and pencil to create six images of players such as Rube Foster, Mamie "Peanut" Johnson, Connie Morgan, Toni Stone, Satchel Paige and the legendary Jackie Robinson.

Morrison will present a commentary that places an emphasis on the women who owned, managed, and played in Negro League Baseball as well as the impact that black players had on Major League Baseball and its Hall of Fame.

There will be a Q & A period. Food will include delicious sandwiches, salads, fruit and vegetable platters, brownies and cookies.