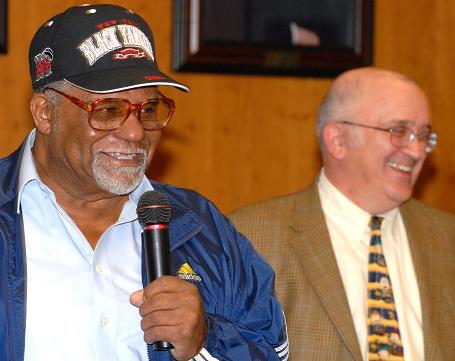 Ed Landrock photo
Dr. Lawrence Hogan, Senior Professor of History at New Jersey's Union County College, was a key consultant in the creation of the Pride and Passion exhibit. He has taught, researched, written about, and spoken in the field of African American history for more than 40 years. His 2006 book Shades of Glory: The Negro Leagues and the Story of African-American Baseball (National Geographic) marks a truly significant advance in Negro Leagues scholarship.

Bob Scott pitched for several professional teams, including the New York Black Yankees, from 1941 to 1955. The muscular Georgia right-hander "could throw as hard as a mule could kick." After his retirement from baseball, Scott had a long career as a union bricklayer. In 2008's symbolic draft of Negro League stars, he was chosen by the NY Mets. Geoff Gehman of The Morning Call profiled Scott on an earlier visit to Kutztown that same year.

Where: Room 100B, Rohrbach Library

(Books and memorabilia will be available for purchase)