MLA -- Places to look for HELP

For MLA online, use the Online Writing Lab (OWL) program from Purdue University. 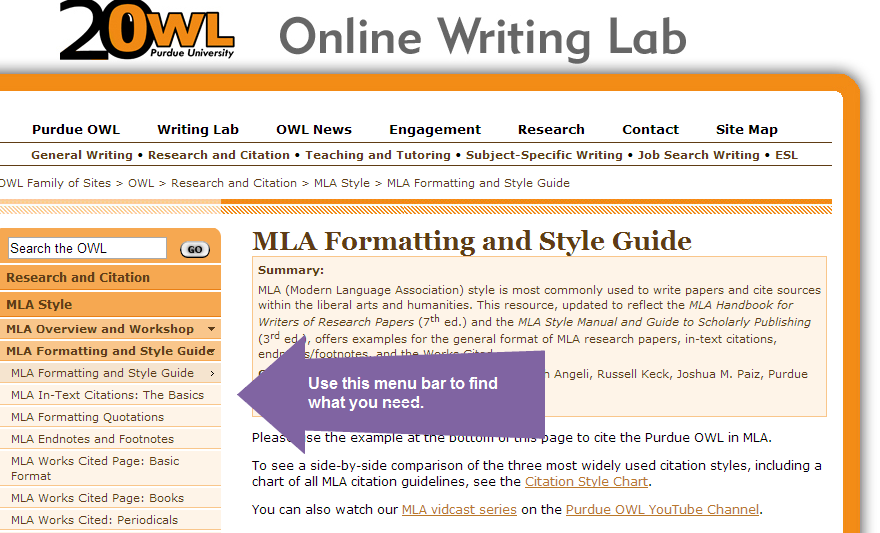 Click here to go directly to the MLA page.

Use the frame on the left to find how to cite different formats in your bibliography, and how to cite sources within your analysis.

Use the HELP in Microsoft Word

and type in MLA Format to see a list of guides and web pages that can help.

Make sure you are using the 2009, seventh edition of MLA and your version of MS Office.

There are also a number of tutorials on YouTube

The source for this information is the website for the Online Writing Lab at Purdue University.  The easiest way to get there is to Google: Purdue Owl MLA.

MLA for Journal Articles from the Library's databases:

Note: If you are copying the citation from a Library Database, such as EBSCO, watch for common mistakes in the CITE function in databases. You will need to:

Cite a newspaper article as you would a magazine article, but note the different pagination in a newspaper. If there is more than one edition available for that date (as in an early and late edition of a newspaper), identify the edition following the date (e.g., 17 May 1987, late ed.).

The Name of the Newspaper is in Italics.

If the newspaper is a less well-known or local publication, include the city name and state in brackets after the title of the newspaper.

Cite by listing the article's author, putting the title of the article in quotations marks, and italicizing the periodical title. Follow with the date of publication. Remember to abbreviate the month. The basic format is as follows:

1) on the screen that displays a single article, use the cite button

2) on the SAVE or EMAIL screen, select MLA, then SAVE or SEND.  The article's citation will appear in MLA format when you retrieve it.

1) on the screen that displays a single article, use the CITE button

2) on the EMAIL screen, select MLA, then SEND.  The article's citation will appear in MLA format when you retrieve it.