A 6:23 segment of the excellent documentary The Untold Truth, narrated by Louis Gossett Jr.

Integrating Cleveland Baseball: Media Activism, the Integration of the Indians and the Demise of the Negro League Buckeyes
Liscio, Stephanie M. McFarland & Co. 2010

The Kings of Casino Park: Black Baseball in the Lost Season of 1932
Aiello, Thomas. University of Alabama Press. 2011

Negro Leagues Baseball at the Internet Public Library, an excellent index with links to many worthwhile sites

Negro League History at MLB.com  from the site of Major League Baseball, includes profiles of dozens of Negro Leaguers

"The Integration of Negroes in Baseball," by Dan W. Dodson.  Journal of Educational Sociology, Vol. 28, No. 2 (Oct., 1954), pp. 73-82 - Written while baseball's color line was dissolving, the article analyzes the strategies of Branch Rickey, the Dodgers GM who signed Jackie Robinson, and suggests how others working for desegregation in other fields could learn from his example

"From Fraternity to Fracture: Black Press Coverage of and Involvement in Negro League Baseball in the 1920s," by Brian Carroll. American Journalism, Spring 2006, Vol. 23 Issue 2, p69-95

"Earl Mann, Nat Peeples, and the Failed Attempt of Integration in the Southern Association," by Kenneth R. Fenster.  NINE: A Journal of Baseball History and Culture, Volume 12, Number 2, Spring 2004, pp. 73-101

"'What's Wrong With Baseball': The Pittsburgh Courier and the Beginning of its Campaign to Integrate the National Pastime," by Chris Lamb.  Western Journal of Black Studies; Winter 2002, Vol. 26 Issue 4, p189, 15p

"The Enemies at the Gate: An Economic Debate about the Denouement of Negro League Baseball," by Patricia Vignola.  NINE: A Journal of Baseball History and Culture, Volume 13, Number 2, Spring 2005, pp. 71-81

"When All Heaven Rejoiced: Branch Rickey and the Origins of the Breaking of the Color Line," by Lee Lowenfish.  NINE: A Journal of Baseball History and Culture, Volume 11, Number 1, Fall 2002, pp. 1-15 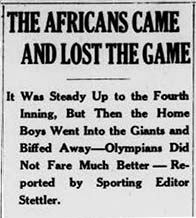 From our online archive of The Kutztown Patriot

Our spectacular Dissertations and Theses database gives access to in-depth studies by scholars in a wide range of fields. Hit here, then log in if you are a KU person off campus, and do a quick search on negro league for a wealth of papers related to Negro League topics that are readable in full online.